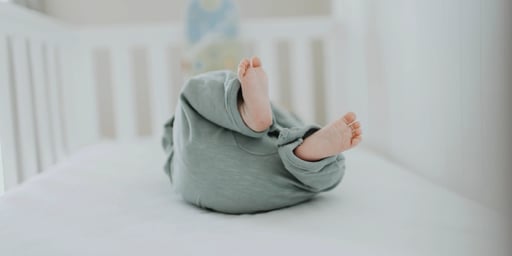 Reflections on Maternity Leave: How I’ll Approach the Next Few Months

Starting and running this company has (hopefully!) prepared me for motherhood—but taking a short break from the work I love? That's something entirely new.

CatalystCreativ co-founder and CEO Amanda Slavin gave birth to a happy, healthy baby boy earlier this week. (Welcome to the world, Logan!) Prior to all the excitement, she wrote down some of her thoughts on the three-month-long maternity leave she’s embarking on.

In many ways, I feel like I had my first “baby” seven years ago.

Since co-founding this agency, I regularly find myself staying up at night, worried about little things… a misspelling on an Instagram post, wondering if something on our website is best reflecting our most recent work, or wishing I could add one more slide to a client proposal we just submitted. As a co-founder, and CEO, I am inextricably attached to the wellbeing of this company. I have tied so much of my identity into its success and its continued growth.

But CatalystCreativ is no longer a baby. It’s not even a cute, toddling little startup!

It has defied the odds. (Most startups don’t last a year, let alone seven.) But we have shown to ourselves and others that we are a legitimate, successful business. When we started out, our team was comprised of relative babies as well—a bunch of 20-somethings!—but since then, we’ve all greatly surpassed the 10,000 hour rule and have countless incredible projects with major brands under our belts. Even though I can now recognize these things in my own company, it doesn’t make it any easier to take a step back for these next few months while I’m on maternity leave.

Part of the challenge is that I truly love the work that I do. If you’ve ever met me, or heard me speak, or read my writing, you know that I am 100% certifiably obsessed with engagement, and wholeheartedly believe in the framework we have been using at CatalystCreativ since day one. The Seventh Level didn’t just help us differentiate ourselves from the other million “baby” agencies out there—it truly guided us to where we are now.

The Seventh Level is defined as literate thinking: when your personal values and beliefs align with that of an organization or other person. My personal values and beliefs—a passion for inspiring and educating—has aligned with CatalystCreativ for seven years. It started as a learning series in Downtown Vegas, bringing thousands of people to town to give and listen to free talks, with workshops open to the public. It literally changed people’s lives! And of course, it changed ours, too.

What started in Downtown Vegas led to us working with startups, Fortune 100 brands, and nonprofits to change the way they connected with their customers. It has all filled and fulfilled the past seven years of my life, often to the point of near obsession.

Level 3 of the Seventh Level Framework is called “frustrated engagement,” and it’s when you want to engage with something or someone but become distracted. I think in the beginning, as a startup, you need a “helicopter parent” to be obsessed with every detail, making sure every job is done and done correctly, and generally keep things moving forward and free of distraction.

But as the startup matures and changes, the job of the “parent” changes too. That person needs to move out of the way and let the company be the best version of itself without projecting a different, idealized version onto it.

That is a crucial step for any good CEO. But as a passionate, dedicated, overly committed, co-founder, that becomes difficult! And so, while early on, I had to feed, burp and change the diapers of CatalystCreativ every few hours just to keep it alive, now, I don’t need to.

I have tried everything in my power to create boundaries for myself so I don’t keep everyone distracted from doing their actual jobs. It still takes work to keep myself from thinking about all of the tiny, minute details that really don’t matter in the long run to a normal person, but that can keep an obsessive, over the top helicopter CEO up at night.

So when I decided to try to have a child, I knew that this was probably the time to let the seven year old go to school on their own and create their own pathway forward, (I’m really proud of how far I’ve been able to take this metaphor, in case you were wondering!).

I knew that to take the maternity leave my family and I wanted and needed, it would mean stepping away from most of the odd jobs I have created for myself, and allowing the space needed to set myself up to actually be a mom.

That meant allowing for others, like my incredible co-founder Robert, to step into roles that they have been playing all along, but I have been distracting them from. That meant identifying new business models that were not solely dependent on me, like growing The Seventh Level into a full website, brand, and book, then allowing the team to bring it all to life. That meant, years ago, setting up the company to be self-organized, and then letting people actually function in the roles assigned to them, rather than asking them to do 9 million other things that fall outside of those roles.

For the next few months while I recover and get to know my new baby and focus on being a mom and breathe, I can rest easy knowing that my first baby is in great hands. (And my team can rest easy knowing that even though I might want to send out an email at 3AM or respond to a Slack message, I won’t, because I’ll—for once—be too exhausted and drained to type anything out!)

And so while leaving my first baby to fend for itself for a few months feels like the most daunting thing I’ve ever done, I know that while I’m on maternity leave, Catalyst will continue to reach its potential. I will give it the space it deserves to flourish on its own terms with greater team input. And after seven years of giving so much, but also taking so much of my identity from it, I hope I’ve learned all I need to apply to take on my latest entrepreneurial venture: motherhood.

So long for the next few months, CatalystCreativ. I can’t wait to see how much you’ve grown when I get back!